Download: The concepts of stoichiometric and site binding constants

The interaction between a monovalent ligand L and a multivalent receptor R involves the presence of various species, including the complex of R fully saturated with a number of ligands, and intermediate complexes of R partially saturated. This scenario can be described in terms of reaction schemes following two approaches:

For a better understanding, let´s consider a particular case where L binds to a bivalent receptor:

This approach uses a reaction scheme based on the binding of the ligand to individual sites present in the receptor and considering that all the sites are independent; thus, it supplies site binding constants.

In this case, the reaction scheme considers the presence of two sites in the bivalent receptor and two intermediate complexes (R, L and RL) formed when the ligand binds to s1 or s2 and consequently, the existence of a total of 4 equilibria (Fig. 2). The corresponding binding constants, Ks1, Ks2, Ks1, s2 and Ks2, s1, are denominated site binding constants since they refer to equilibria between L each specific site of R.

In the second part of this course, we are going to show you how to perform the analysis of binding isotherms considering an independent sites approach.
This approach uses a reaction scheme based on the binding of the ligand to individual sites present in the receptor and considering that all the sites are independent; thus, it supplies site binding constants.
This approach offers a sole reaction scheme where a receptor with a certain number of sites “n” binds to the ligand.
The sites are grouped into sets to discern between sites that are non-equivalent.

If you want to know more about how to get the stoichiometry (number of sites) and site binding constants with the independent sites approach you can click here:

The first video tutorial presented is about how to use an independent sites approach to perform fittings:

Into another subject, to introduce the second fitting approach that can be performed with AFFINImeter (Stoichiometric equilibria), we will describe how to use the model builder.
This original tool allows to design and apply your own binding model in an easy way. Check the following video to know the versatility of the model builder:

Finally, if you want to try the Model Builder click here:

END_OF_DOCUMENT_TOKEN_TO_BE_REPLACED

The interaction between two species, i.e. a protein and its ligand, is defined by means of the equilibria existing between free and bound species and the binding constant(s) associated to each equilibrium. This scenario can be described in terms or reaction schemes following two approaches:

b) Based on equilibria between the ligand and specific interaction site(s) of the protein, to obtain site binding constants. 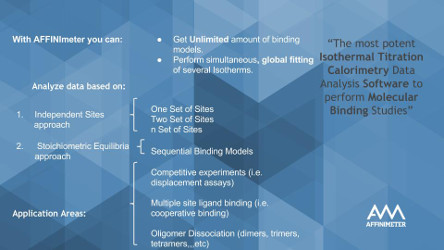 The understanding of both approaches/type of binding constants is key for a correct interpretation of the results after data analysis, in order to get key structural and mechanistic information of the binding event; i.e. the presence or absence of cooperative interactions when a ligand binds to a multivalent receptor.
The design of binding models for ITC curve fitting with AFFINImeter can be done following these two approaches, to perform analysis based on stoichiometric and/or site binding constants.

The scientific team of AFFINImeter has just released three NOTES regarding this subject to guide users into the right selection of binding model approach and a better understanding of stoichiometric vs site binding constants.

Or visit the RESOURCES section of AFFINImeter web page where you find tutorials, webinars, cases of use, among others.

A successful Isothermal Titration Calorimetry (ITC) experiment requires the acquisition of high quality experimental data together with a careful analysis. Choosing the right binding model to fit the ITC isotherm is critical in order to get the true thermodynamic profile of the interaction. Often, the main limitation to achieve good results arises when the evaluation software lacks of the mathematical model that best describes our binding experiment. A good example is the case of a ligand binding to a macromolecule with multiple independent sites, i.e ligand – DNA interactions (1). Until now the readily available mathematical models to fit such experiments was limited to one or two sets of “n” independent identical sites; frequently, these models offer a poor description of the interaction due to the inherent higher complexity of the system, where many distinct binding equilibria coexist.

AFFINImeter ITC offers an unlimited number of user-defined binding models. Particularly, it counts with a feature to easily design models based on multiple independent binding sites. Here, a model with a number of sets of independent sites can be created with no limitation in the number of sets or sites. Noteworthy, the number of sites in each set can be considered as a fitting parameter throughout the data analysis. As an illustration, the following figure shows the reaction parameters of a model generated with AFFINImeter that describes a ligand binding to a receptor having 3 sets of sites, each set having an unknown number of sites. Fitting the experimental data to such model yields the microscopic association constant (K) and the change in enthalpy (ΔH) of the ligand binding to each site type, and the number of sites in each set (n).

These binding models, described by numerous variable parameters, may end up in an over-parameterized fitting function. Thus, the best strategy to achieve a robust and consistent analysis involves the global fitting of several ITC curves acquired under different experimental conditions. In this sense, AFFINImeter also supports global fitting of multiple isotherms wherein parameter linkage between curves is used to decrease the relative number of estimated parameters per experiment.