Fluorescence Polarization competition assays are widely used in numerous research fields to determine the affinity of unlabeled ligands that compete with a fluorescent probe for binding with the same macromolecule. Herein, we show how to perform a thoughtful analysis of these experiments with AFFINImeter for spectroscopic techniques, to elucidate, not just IC50 values, but also a quantitative direct measurement (KA) of the binding affinity.

Fluorescence polarization (FP) is a powerful technique that nowadays is widely utilized in high-throughput screening (HTS) and drug discovery (1). In FP assays monitoring a binding event is possible mainly because this technique is sensitive to changes in molecular weight. The assay requires of a fluorescent molecule (the probe) that is excited by plane-polarized light. For small molecules, the initial polarization decreases rapidly due to rotational diffusion during the lifetime of the fluorescence, which results in low fluorescence polarization. When the small fluorescent molecule binds to a larger molecule (and consequently of slower rotation) an increased fluorescent polarization is observed (Fig. 1).
Advances in experimental aspects of the technique like assay design and fluorescent probes is enabling the application of FP to increasingly complex biological processes (1). 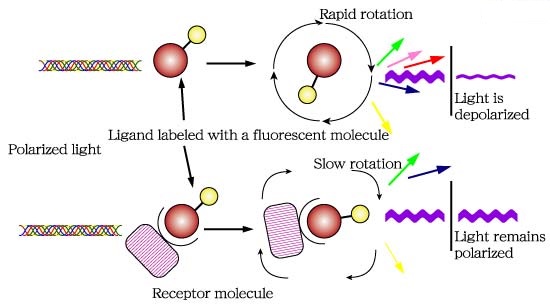 Fig.1. The principle of fluorescence polarization (2).

Frequently, a competition displacement assay format is used in FP experiments where a fluorescent labelled molecule bound to a macromolecule is displaced by an unlabeled molecule with the consequent decrease of polarization. This assay yields a quantitative measure of IC50 values (half maximal inhibitory concentration) of the unlabeled competitors. However, IC50 does not provide a direct measure of affinity and the calculation of the binding constant (KA) is often desirable. In this sense, the software AFFINImeter Spectroscopy offers exclusive analysis tools to perform a thoughtful analysis of FP competition assays, to directly deliver values of binding constants of the interaction between the competitor and the macromolecule. As an illustrative example, we present herein the use of AFFINImeter Spectroscopy for the analysis of FP competition assays to characterize oligosaccharide –protein interactions.

Midkine is a cytokine which biological activity is regulated by its binding with glycosaminoglycans (GAGs), such as heparin and chondroitin sulfate. To better understand these recognition processes Pedro M. Nieto et al. have recently reported the binding of a series of synthetic chondroitin sulfate-like tetrasaccharides with midkine, using FP competition assays (3). First, the direct binding of midkine and a fluorescein labelled heparin hexasaccharide (fluorescent probe) was monitored in a direct FP titration (Fig. 2a). Second, FP competition assays were performed, in which the polarization of samples containing fixed concentrations of midkine and fluorescent probe was recorded in the presence of increasing concentrations of different synthetic sugars to obtain the corresponding IC50 values (Fig. 2b) (3). 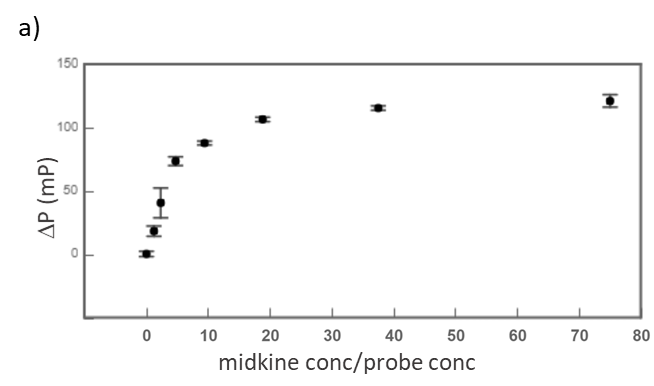 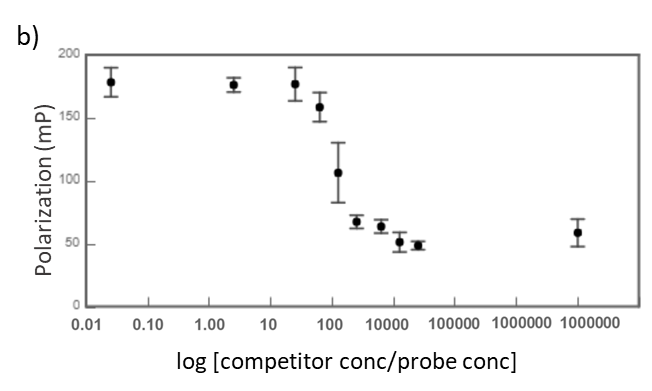 The determination of KA of the interaction of the unlabeled ligand with the macromolecule in an FP competition assay is possible if the corresponding curve is analyzed using a competitive binding model where two equilibria are described, one between the free species and the macromolecule–probe complex and one between the free species and the macromolecule–competitor complex. In this analysis, the KA value of the interaction between probe and macromolecule can be fixed (as it can be previously calculated from the direct binding experiment) in order to determine KA of the competitor-macromolecule complex. Yet, a more robust approach consists of a global analysis of direct and competitive curves where constraints between experimental parameters are imposed. Using this approach, we have used AFFINImeter Spectroscopy in the analysis of data from the direct measurement of the fluorescent labelled hexasaccharide binding to midkine and together with data from the displacement assay using an unlabeled, synthetic disaccharide as a competitor (4).

An AFFINImeter fitting project was generated where the curve from the direct titration and two curves from replicates of the competitive assay were included. A 1:1 simple binding model and a competitive model were used to fit direct and competitive data, respectively (Fig. 3). 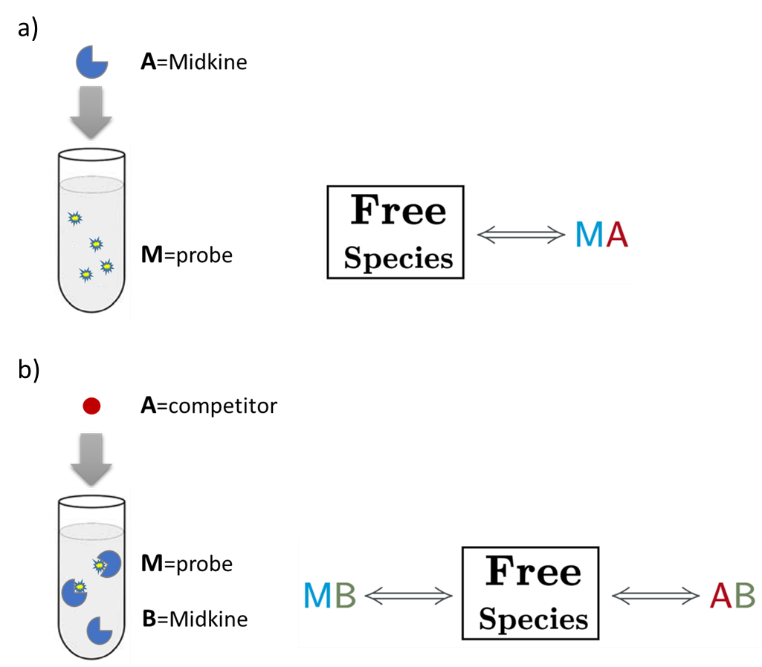 Fig.3. Schematic representation of the binding models used to fit the FP data.5 These models can be easily built with the “model builder” tool of AFFINImeter where a) in the 1:1 model “M” represents the species sensitive to binding (fluorescent probe) and “A” represents the titrant (midkine); b) in the competitive model “M” is the sensitive species (probe), A is the titrant (competitor) and B is a third species involved in the event (midkine in a preformed complex with the probe).

In the analysis, the fitting parameters considered were the KA of each complex, the signal value of the unbound state (s0), and the maximum signal change (Δsmax) of the midkine-probe complex formation. Δsmax of the midkine-competitor complex is equal to zero because the competitor is not fluorescent. Since midkine-probe binding is present in both models, restrictions were made considering that KA and Δsmax of the 1:1 model (FS↔MA) are equal to the same parameters describing this equilibrium in the competitive model (FS↔MB). Besides, s0 was common between replicates of the competitive assay. It is worth to mention that the curves analyzed are the mean of three replicate experiments and the corresponding standard deviation of the curve data points are also considered in the fitting process.  The global analysis performed in this way returned the KA of the interaction of midkine with the probe, (3.09 ± 0.18)*107 M-1, and with the competitor, (5.30 ± 0.52)*106 M-1 (Fig. 4). Additionally, AFFINImeter automatically generates the species distribution plot, valuable in the interpretation of results. The species distribution plot of Fig. 4c shows the displacement of the probe by the unlabeled disaccharide in the competition assay.

Fig.4. a) Global analysis of FP curves from the direct titration of probe (10 nM) with midkine (12 – 750 nM) and from a competitive assay consisting of a sample with probe (10 nM) and midkine (63 nM) where the competitor is added at increasing concentrations (0 – 20 mM). Curves from two replicates of the competitive assay were used in the analysis. All the polarization values are the average of three replicate wells and the error bars represent the corresponding standard deviation; b) values of KA, s0 and Δsmax determined for each equilibrium; c) species distribution semi-log plot of the competitive assay.

This case study exemplifies the utility of AFFINImeter Spectroscopy in the analysis of FP competitive binding assays. The advantages of using this software rely on the possibility to obtain reliable KA values of the binding between competitor and macromolecule from a global analysis where KA and Δsmax of the probe-macromolecule complex, are shared parameters between curves (they are not pre-determined fixed parameters). Besides, standard deviation between replicates is taken into account in the fitting process. Ultimately, these tools provide a more robust analysis and reliable characterization of binding interactions monitored through competitive assays.

We would like to thank Dr Pedro Nieto Mesa and Dr José Luis de Paz Carrera from the Institute of Chemical Research (IIQ) of the Spanish National Research Council (CSIC), for kindly share with us the FP data presented herein.

2 This figure has been taken from http://glycoforum.gr.jp/science/word/glycotechnology/GT-C06E.html.

4 The competitor is a synthetic disulfated disaccharide described in ref. 3b as compound 18.

5 These model were created with the “model builder” tool, exclusive of AFFINImeter. For more information go to AFFINImeter knowledge center.

Isothermal Titration Calorimetry (ITC) is a versatile technique with the potential of deconvoluting the various binding events that may coexist in complex interactions. In this sense, a major drawback has been the lack of mathematical models and computational tools to properly analyze such experiments. AFFINImeter counts with an advanced functionality, the “Model Builder” with which researchers can easily design their own binding models through the combination of distinct (coupled) binding equilibria, to obtain thermodynamic and structural information from complex ITC experiments.

Two Competing ligands binding to a receptor with two sites

As a demonstration of the potential of AFFINImeter and its “Model Builder”, the analysis of an ITC experiment involving a receptor “M” (biomacromolecule) with two different binding sites (s1 and s2) that may accommodate two competing ligands (“A” and ”B”) is presented here.

Competitive binding assays where two (or more) ligands bind to the same receptor have become common experiments in many research areas, from basic investigations to innovation in the pharmaceutical industry. These assays can be done in different formats, i.e. through a displacement assay where ligand “L1” is displaced by ligand “L2” from a preformed complex “L1-receptor” or via titration of a receptor solution with a mixture of L1 +L2. Either way, the competitive binding assay provides rich thermodynamic and structural information of the various binding events taking place during the course of the experiment. Thus, Isothermal Titration Calorimetry (ITC) competition assays performed in a displacement format have been revealed as an efficient tool for the quantitative analysis of very high- / low- interactions, with application in the field of fragment based drug screening (ref).

Analysis of competition experiments with AFFINImeter

The versatility of the experimental setup in AFFINImeter-ITC permits the analysis of ITC competition experiments in its various formats. As an illustration, the following lines describe the analysis of an ITC isotherm resulting from a competitive experiment where a solution of a receptor in titrated with mixture of two competing ligands.

AFFINImeter contains a series of examples with which users can practice and learn the overall process of data fitting: from equipment and data uploading to fitting model design and data fitting.

In this post we will review an example of a competitive model fitting model used to analyze the experiment data of two ligands in the syringe competing for binding to the same receptor.

The AFFINImeter example “competitive binding model” illustrates an ITC experiment where two ligands, “A” and “B” compete with each other for binding to the receptor “M”.

This situation corresponds to a binding model consisting of three free species (A, B and M) two binding equilibria representing the interaction of M with A and M with B

How to fit a project with AFFINImeter

1- Go to PROJECT MANAGEMENT and create a new PROJECT an a new FIT SUBPROJECT.

This Steps are described in the following Video Tutorial:

You can follow this tutorial in AFFINImeter, the Experimental Data and Binding model are stored in your own AFFINImeter account. If you hasn’t registered yet go to the AFFINImeter Software WebPage to get your account.

The Model Builder is one of the novel features of AFFINImeter.  Through the model builder AFFINImeter offers an unlimited amount of thermodynamic models for ITC data analysis. The overall binding equilibria within the species involved in the experiments is easily drawn by the user directly in chemical language. Then AFFINImeter translates the resulting reaction scheme into robust  binding  models to be used to isotherm ITC simulation or to perform Isothermal Titration Calorimetry curve fitting.

The model builder is a versatile tool, it allows to design models involving up to three different species (i.e. the case of two ligands that compete with each other to bind a macromolecule) and has the advantage to selectively place them in the  syringe cell and/or in the calorimetric cell.

It also allows the design of models for dissociation, ranging from simple homodimers to higher-order oligomers. During the model construction no mathematical equations are required, once the whole set of binding interactions is defined by the user in the reaction builder, AFFINImeter internally generates the system of equations that define the reaction scheme proposed. The new model (reaction scheme and equations) is saved  internally by AFFINImeter and listed in the user’s database so that can be utilized anytime so simulate or fit data.

With this extensive offer of model families the user will be able to perform the thermodynamic characterization of a vast variety of biological and physicochemical processes from ITC measurements. A few examples of classical and new applications of ITC experiments that you can analyze with AFFINImeter are: